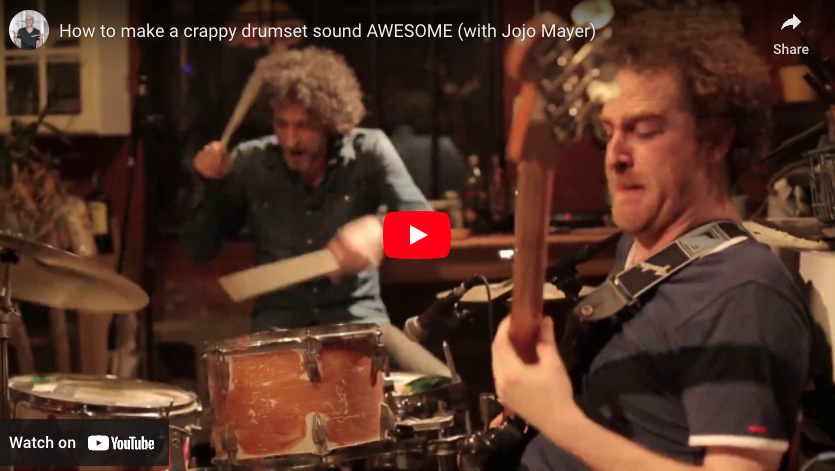 How to make a crappy drumset sound AWESOME (with Jojo Mayer)

Here’s the big secret about gear that will be our basic approach: it doesn’t really matter! The paradox is that it actually does matter, but we’re going to approach it in a way that at the end of the day, the sound is in YOU and how you THINK, FEEL, and MOVE. You can create art and express yourself with a branch and log in the forest if you had to. We respect gear, keeping our tools sharp and choosing them with care, but always keeping in mind what really matters. The gear doesn’t create your sound, YOU do. This way you can be in any situation and still sound your best, not panicking if you don’t have access to all of your regular tools. There’s a great story about John Bonham from Led Zeppelin, when he was at a friends house taking his son to a children’s birthday party. There was a small kids drumset there, and as he sat down to play it, one of the parents there said, ‘He’s making that kids drumset sound like Led Zeppelin! When my kid plays it, it sounds nothing like that!’ That’s because the sound was in HIM. We all carry our personal sounds with us, and the overall goal of this journey is to bring it out, through habits, movement, and vocabulary.

The high standard we set of giving attention to detail and to the granularity of our craft, means we choose our gear with great care, but also to remember that our sound is within US, and in a way it really doesn’t matter. This is the ‘two-faced’ dichotomy of one of the many Yin Yang perspectives in drumming and art. Pay attention to the smallest of details, take great care in choosing your tools, giving focus to the smallest of details, then let it all go and just PLAY! The gear IS not your sound, it is only there to capture and enhance what is already within you. With this approach, you can make any drumset groove to create SYNERGY.

GAME OF THRONES: YOUR CENTER

What do you think is the most important piece of gear on your entire set? I saw this question challenged to a large group of drummers, and there were so many different answers given, that all made sense. ‘The drumheads, because that’s what makes the sound.’ ‘The sticks because that’s your connection to the instrument.’ ‘I play double bass, so it’s my pedal!’ ‘I play jazz, so it has to be my ride cymbal.’ ‘The snare drum, because that’s the heart of the drumset and where rudiments come from.’ ‘The shells of the drum, because that’s where the tone comes from.’ These are all good answers, but none hit the mark. It’s your throne! No one even thought to mention the seat. Pay special attention to the drum throne you typically use. When I got my first drumsets, my seat was always an afterthought. I saved all my money for cymbals, drumheads, pedals, and sticks, and spent whatever I had left over for the seat. The drumset is the only percussion instrument in the world where you are using two hands AND two feet simultaneously, so unshakeable balance from a strong core comes before all else. Your movements will flow from how solid your core center is, and this will define your sound. Think like a tap dancer, with a strong center core of balance in which to express your rhythms from. Someone playing a mediocre drumset with a high quality seat will create a far superior sound than someone with an amazingly expensive dazzling drumset, but a rickety, unbalanced throne. Strong balance will create a strong sound.

Why is it called the ‘throne?’ A regular old chair or seat is made only for sitting or resting. A THRONE is for a King or Queen. What does a King or Queen need to rule? Action, decisiveness, self control, alert but calm, intense focus and concentration, and awareness of surroundings are all essential. All of these qualities are needed by a strong drummer of any band. The drummer is practicing leadership from the foundation, the way that your spine or heartbeat would ‘lead’ your body by being the strong foundation for all else to flow from. The rest of the band has nothing without a strong drummer! A King or Queen also ‘forgets’ about the throne they sit on so they can focus on where they want to bring their attention, so a good throne is also one you won’t constantly be thinking about like a rock in your shoe, but where you’ll be able to be at the height of your powers by slipping into FLOW and letting go of conscious thought. Think of yourself not as a drummer, but as a SOUND CRAFTER using what you have in the moment to create ART out of what is in front of you. Have fun in the process. You’ve got this! IAO: Improvise, Adapt, Overcome.

THE FLOW OF MOVEMENT: HOW YOU MOVE IS HOW YOU GROOVE!

Drumming in the LTR METHOD is all about the study of movement, because movement creates your sound. Whether you are relaxed, flowing, and smooth, or jerky, stiff, and tense, your motions will give you the equal auditory imprint. Relaxed movement creates a relaxed sound, and stiff movements create a stiff sound. The one time I really understood this in a massive ‘a-ha!’ moment was when I played a music festival in downtown Kingston, Canada. The entire downtown was transformed into a multitude of bands playing on many different streets and venues. As I walked around outside during our break, I would leave the earshot of hearing one band, and as I walked further on I would start to hear another a little further in the distance. Wherever I walked, I could hear a new band ahead as the one behind would fade. Since I’m a drummer I especially noticed the drums, and as I walked I could predict almost exactly what the drummer would look like only by HEARING them in earshot first before I actually saw them. It was a neat experiment, and was accurate every time! The movements matched the sound. If I really listened to the groove and noticed it was a little stiff and jerky, sure enough the drummer had those same movements. I remember hearing in the distance a really smooth, round, bouncy infectious groove, and headed toward it like a magnet. Now THAT’S where I want to go! I thought ‘let’s see how that drummer is moving’, predicting it before I actually saw it. I had a feeling I would see some pretty awesome technique, and I wanted to learn from that drummer to help my own sound. Sure enough, what I saw exactly matched what I had imagined in my mind only from hearing the drums. This drummer had flowing, controlled, perfect movements that was creating that same sound.

An experiment you can do on your own is to watch some of your favourite drummers on video, but with the sound MUTED. This sounds counter intuitive, because after all you do HEAR the drums! I’ve tried this, and its really fun to see how the movements of your favourite drummers are so crucial to the sound that we know and love. Then, almost like an actor or someone trying on clothes, you can mimic the body language of the movements and see how it changes YOUR sound, and also getting you closer to achieving and further inside the sounds of your favourite drummers. Put some mirrors around you as you practice, and video yourself as well to compare and experiment. Be bold, and have fun with this process! Movement really is everything, much more than the mistaken overemphasis on drums, heads, cymbals, sticks, and other gear. How you move is how you groove!

Close Menu
We use cookies on our website to give you the most relevant experience by remembering your preferences and repeat visits. By clicking “Accept”, you consent to the use of ALL the cookies.
In case of sale of your personal information, you may opt out by using the link Do not sell my personal information.
Cookie settingsACCEPT
Privacy & Cookies Policy

Any cookies that may not be particularly necessary for the website to function and is used specifically to collect user personal data via analytics, ads, other embedded contents are termed as non-necessary cookies. It is mandatory to procure user consent prior to running these cookies on your website.